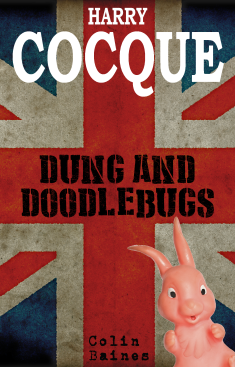 “It’s got a rubber rabbit on the cover, so it MUST be good.”

Harry Cocque is a quick-witted young lad living in rural Dorset at the outbreak of World War Two. Determined to do his bit for King and country, he joins the army and is selected for ‘special duties’ with S.W.E.A.T. (Secret Weapon Experiments And Testing), based at an old lunatic asylum.

While the villagers struggle to cope with the threat of invasion, rationing, blimps and Morris Dancers, Harry’s somewhat unconventional military career gets him involved in all kinds of peculiar projects, from bouncing bombs and vegetable promotion to a strange incident with a rubber rabbit.

Everything changes with the arrival of thousands of American troops in Dorset, when Harry is called upon to assist in training and helps arrange a showpiece baseball game between the GIs and the villagers. Desperate to meet the enemy face to face but denied transfer to a combat unit, a frustrated Harry devises a plan to join the GIs for the D-Day landings. What could possibly go wrong?

Buy the paperback from Amazon